Cats is a Bad Adaption, Too – Silent Confidence Skip to content

Cats is a Bad Adaptation, Too

I remember when the Cats movie trailer dropped. Oh, do I remember. It was all Twitter was talking about for weeks, and the screengrabs I saw every time I tried to have a nice afternoon mindlessly scrolling through my feed nibbled on the ends of my soul, hollowing me from the inside out. I couldn’t believe what I was looking at, the pure insanity of an almost realistically rendered cat body stretched onto the anatomy of a human being with their lips, noses, and eyes peeking through. And once the damned thing finally came out, it was as if all of Hell had broken loose. I’ll never forget the day someone posted the Rebel Wilson skin removing scene. ‘Consider this your flu shot,’ they said, and boy did it work. I wasn’t planning on seeing it before that, but after subjecting my eyes to just those few seconds, I was yearning for death. The idea of sitting in a theater and watching scene after scene consisting of terrifying anthropomorphic body horror sent a shiver straight up my spine. It would be torturing myself, I thought, though admittedly I did almost see it regardless. It was New Year’s Eve, everyone was busy, and the idea of spending an entire day watching everything that was out in theaters did seem fun, cursed Hell film or not. Fortunately it fell through, and the idea that Cats could have potentially been the last movie I ever saw in theaters haunts me to this day. 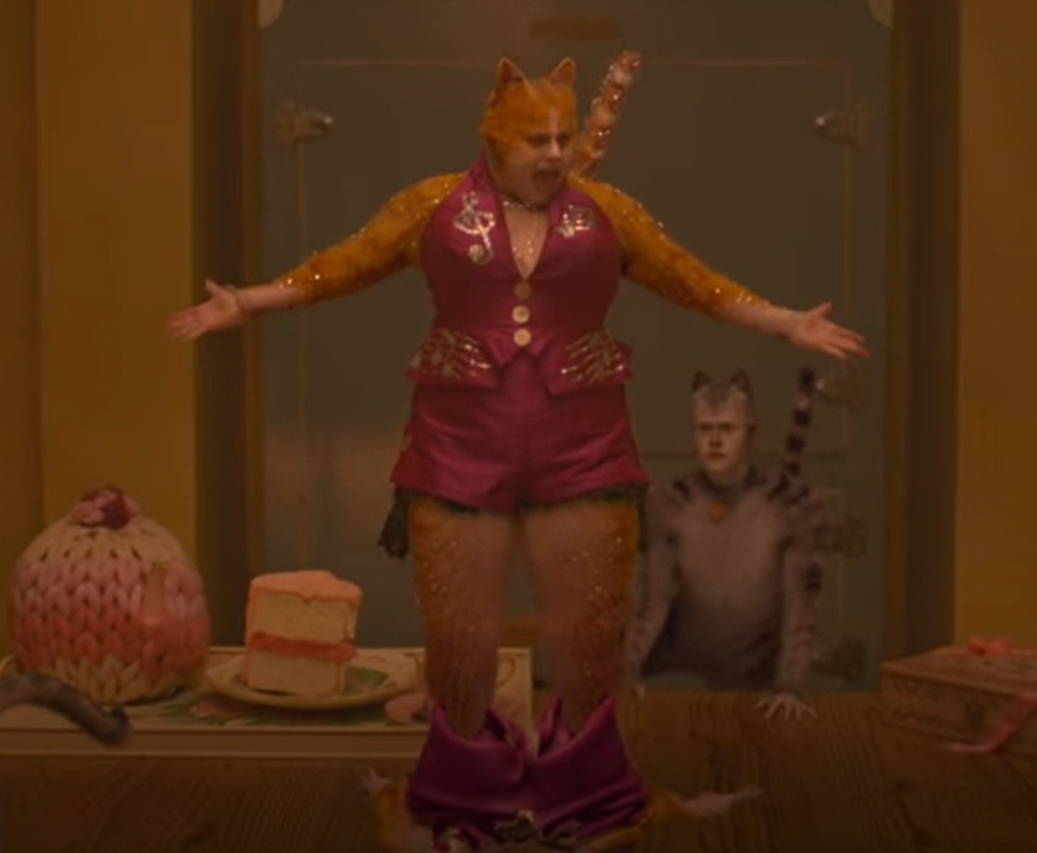 It’s been eight months. No one’s talking about Cats anymore, but truthfully, just within the past couple of months, I have grown endeared to the entire Cats franchise. The 1939 book of poetry that T.S. Elliot had written for his little godchildren, and the 1980’s Andrew Lloyd Weber musical that turned all those poems to songs. Both are good in their own ways; the musical is exceptionally weird, but God if I don’t find myself singing the songs to myself every chance I get. The movie was hated by both lovers and haters of the musical alike, with lovers insisting the movie was a betrayal of everything the musical stood for, whereas haters were pretty willing to shrug it off and say it was exactly like the musical. So my curiosity grew. And I noticed I could rent it on YouTube for $6, which, perhaps a bit more than I would have liked to have spent, but it was still less than I would have spent on a movie ticket. So I took the plunge.

So first things first, I guess. Is it similar to the musical? And well, yes, but only really on a surface level. The musical is extremely lacking in plot, it’s mostly just cats introducing themselves, hoping to be sacrificed to something called the ‘Heaviside Layer’. until a villain named Macavity shows up and kidnaps the cats leader, but then the magician cat brings the leader back almost immediately. The sad old lady who keeps hanging around is chosen as sacrifice and the musical ends. The movie follows those beats almost exactly, though they attempt to add on to the plot in order to make it more palatable to a wide audience. A character named Victoria, who didn’t say a word in the musical, is given the main spotlight, and we get to view the world from her eyes. Macavity too is given much more screen time, and actually given a motivation, something he was sorely missing in the musical. Macavity in the movie wants to go to the Heaviside Layer; he wants to be reborn into a new life, and he is getting rid of his competition one by one to do it. What’s interesting, though, is that despite the musical’s version of Macavity not having any reason for the horrible things he did, he was actually a much more intimidating villain. There was a minor character named Demeter in the musical, whose entire role was to occasionally spot him lingering in the shadows and scream causing the other characters to run and hide. This built the villain up as a terrible threat: what did he do that would cause an entire tribe of cats to flee in terror? We never find out for sure, but what is interesting is after Macavity kidnaps the leader, he actually comes back and tries to take Demeter. Does that mean that Demeter was paranoid for a reason? Does he have beef with her in particular? It’s interesting to think about, and this is all done with no dialogue. 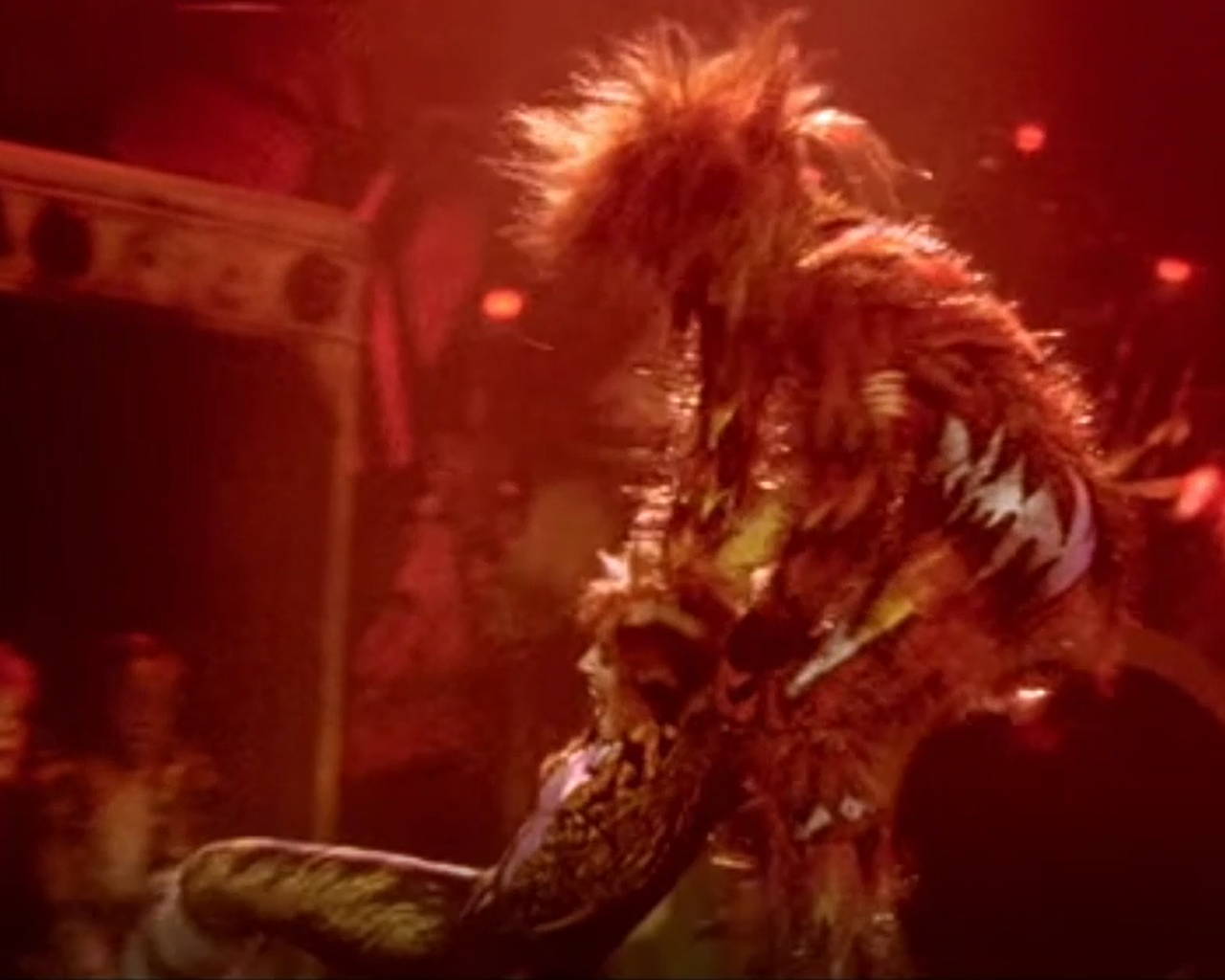 Macavity in the stage show tries to take Demeter

The movie adds a lot of dialogue, but simultaneously removes a lot of the interesting characterization. The villain just sort of appears at multiple points in the film, and none of the characters ever recognize him. Demeter’s in the movie, but she gets no screen time and never interacts with the villain. And the villain’s new motivation, though it’s great he has one, makes him seem pathetic in a way he just wasn’t before. His motivation is to go to the Heaviside Layer, to die, essentially, and he is so desperate for death that by the end he is dangling from a rope on a hot air balloon going up up up to the Heaviside Layer, but is unable to hold on and falls onto a statue. Contrast this with the villain in the musical, who shows up, kidnaps the leader, attempts to kidnap another character, and then beats up the entire tribe before vanishing into the night. Sometimes adding more isn’t just unnecessary, but actively takes away.

But yeah, most of the characters have been heavily, heavily stripped down. Mr. Mistofelees, the vibrant magician character best known for his complex dance moves, os npw bad at magic and doesn’t even get to dance during his song. Jennyanydots, who is a strict yet maternal figure, is introduced as squashing, threatening, and eating alive the mice and cockroaches under her care. Bustopher Jones, the cat who is happily overweight from eating at so many fancy restaurants, is seen scrounging through trash cans and bemoaning his weight. Every single one of these characters have much more dialogue than they did in the musical, and Mr. Mistofelees even has a love interest now, but it was at the cost of every. Single. One. Of their character traits.

So is the movie like the musical? Sure, if the only thing you got out of the musical was that there were cat people dancing around and a weird blood sacrifice. But in my experience, the fans of the musical like it because they like the characters. You go on any YouTube video of the 1998 musical, and there will be comments discussing the characters in length. And really, with the story being so thin, the characters were really what was driving the entire thing. None of the characters in the movie are fun to watch, and it isn’t just because of the horrid designs, though that certainly didn’t help. They aren’t endearing anymore, and at least two of them had all their dignity stripped away to make room for fat jokes. It’s honestly kind of mind blowing that they added so much story, but took away so much character. And for me, that’s the biggest sin the movie commits.