Among Us VS. Push The Button – Silent Confidence Skip to content

Among Us VS. Push The Button

So Among Us is the new thing now. I’m actually really enjoying it, I mean it can be definitely hit or miss but if you find the right group it can be a lot of fun. It is eerily similar to another game I’m awfully fond of though, that being Jackbox’s Push the Button, that was released as a part of The Jackbox Party Pack 6 almost exactly a year ago. Now I am in no way accusing anyone of plagiarism: in fact Among Us has been around since 2018, when Push the Button was probably in production, so I’m not even sure it’s possible the two could have ripped each other off. Plus the whole concept of someone in a spaceship being an imposter isn’t anything new. It’s just a fun coincidence, and I am here to explore it.

So while the concept of a multiplayer space game featuring one or more players being aliens in disguise and the other players having to determine who is an imposter and drop them into space is very much the same, many aspects differ from game to game. For one, while Among Us is meant to be played online with strangers, Push the Button is designed to play with friends in the same room. All Jackbox games are, in fact: the game gives you a code, and everyone plugs the code into their phone to join the game. Among Us allows for this too, with private rooms being available as well, but there is a chatroom in the game when bodies are discovered, as well as the ability to call an emergency meeting at will in order to talk to everybody at once. There is no chatroom in Push The Button, because the game assumes you’ll be in the same room as everyone else who’s playing. Both these social aspects have their advantages and disadvantages: it is a lot of fun to get into screaming matches with your friends, but if you wanted to stream the game it’s borderline impossible to use certain functions in it, since one task in Push the Button literally requires you to describe, out loud, different shapes to the other players. Among Us is better for streaming, and if you find a good group of people you will have a blast. However, that can backfire heavily in the other direction, too; I’ve gotten threatened and sexually harassed in Among Us, and while it’s easy enough to go to another server, it’s still a pain that there’s a chance of that happening.

Moving onto the tasks, both games have them, but they serve very different functions. In Among Us they are mindless busywork that forces the players from one room to another, and into potentially isolated locations with people they cannot trust, and the Impostors don’t get tasks so they have to pretend to do them to avoid looking guilty. However in Push the Button, the tasks are how you determine who is an alien and who isn’t. Humans and aliens will get different prompts, and you will look at what they drew or wrote and try to determine who is guilty. 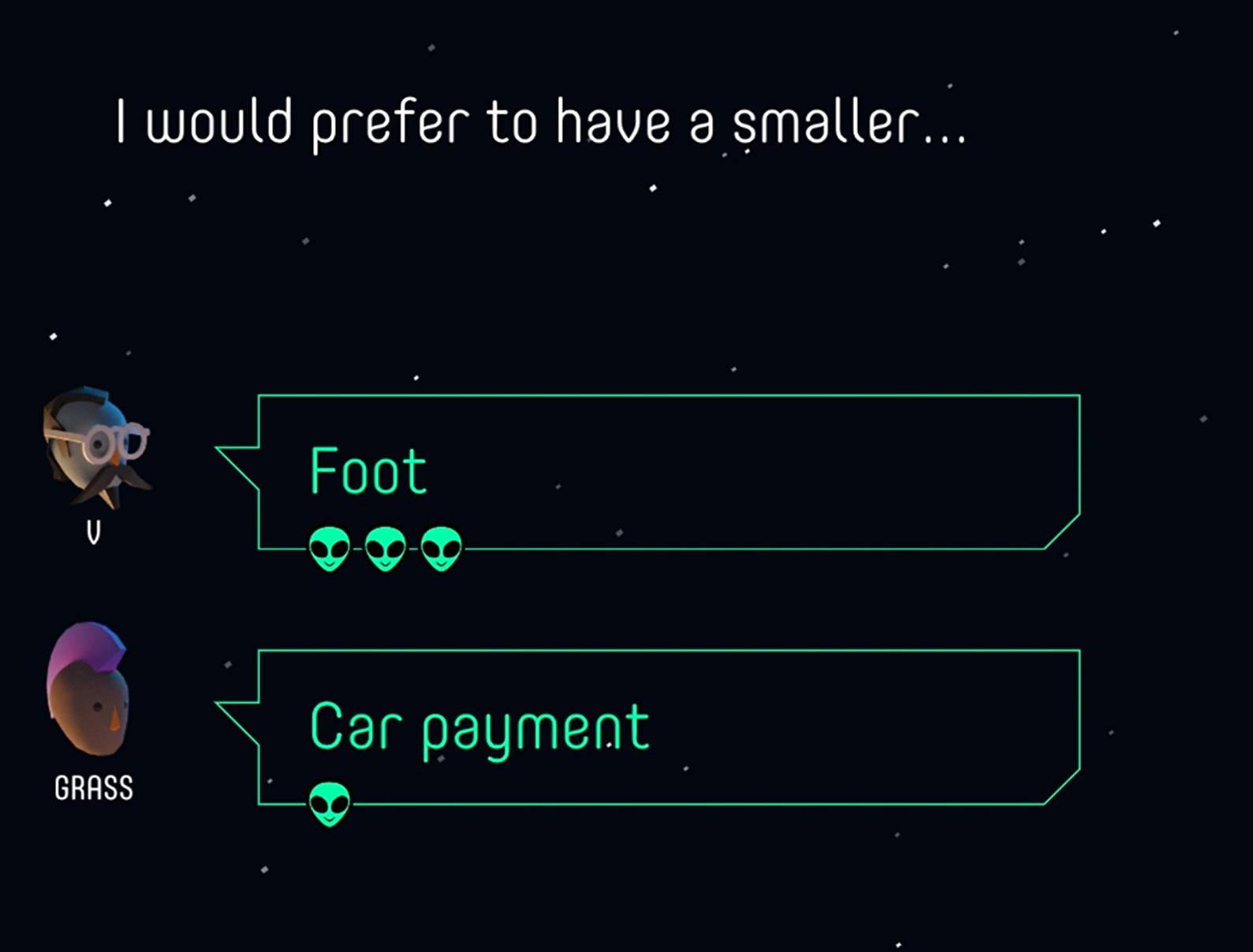 There is also a voting function in each game, where the players decide who to throw out the airlock. This happens over and over again in Among Us; in fact, anytime there’s any kind of meeting a vote is held. You shoot people out the airlock over and over and over again. In Push the Button, while you can do multiple votes, once you shoot people out, it’s over. If you didn’t get all the aliens, that’s it, you lose. So Among Us gives you a bit more wiggle room, a few more chances, whereas Push the Button is much more final and as such the stakes do feel a bit higher.

Another difference is the literal ticking clock that Push the Button has. Among Us can potentially go on forever, if the tasks never get finished and the impostors never caught, but Push the Button gives you a time limit and that is it. You have eighteen minutes to catch the aliens or you lose. As a result, it does feel more stressful. Among Us can be spooky at times, but the general vibe it gives off is that of a little potato man running around fixing wires. But the clock’s always counting down in Push the Button, and it’s a constant reminder of what you have to do.

So that’s just a quick runthrough of the two games. Among Us can be played for free if you get the app, but you get more if you buy it for $5. Meanwhile, Push the Button is only available if you buy Jackbox Party Pack 6, but it comes with four other games, some that I legitimately really like, like Trivia Murder Party 2. So whichever you prefer is entirely up to you, but both are great games that you should check out.